Amendment of the Site Certificate for the Carty Generating Station

o describes the multiplier to be applied to metric tons of methane to obtain the equivalent metric tons of CO2 as “CO2 equivalent” (CO2e)
o has been revised over time and research has resulted in ever-increasing increments
o has become more important over time as increasing leakage has been more accurately measured and associated with fossil fuel fracking
o has different values depending on timeframe of consideration, and the wrong timeframe has been chosen regularly

Global Warming Potential, GWP.  Since 1996 the IPCC has released three (3) revisions to the standard factor describing the properties of methane as a Greenhouse Gas.  In the 20 years after release to the environment, methane is now regarded as 84x more effective in trapping solar heat in Earth’s atmosphere than is CO2.  The history of GWP revisions is given in the following table.  Since climate action goals and plans are predicated in the next 30 years, the 100-year time horizon cannot be employed for near term decision-making.

The trend in quantifying 20-year methane global warming properties is depicted in terms of step increases.  Changes are due to advances in atmospheric science.

Graphic presentation of above table data 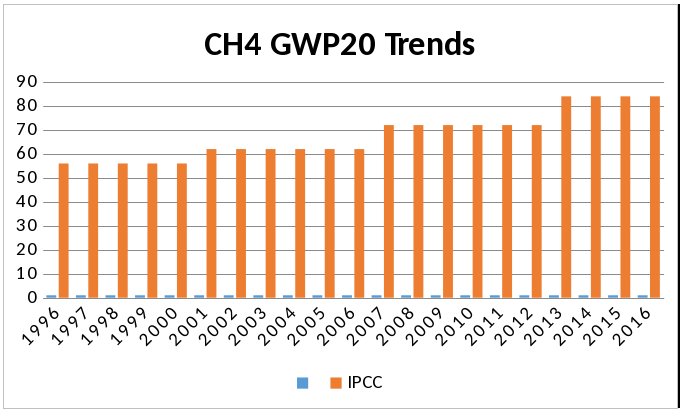 Social Cost of Carbon.  Impact on the environment is not currently factored into the market cost of fossil fuels.  “EPA and other federal agencies use the social cost of carbon (SC-CO2) to estimate the climate benefits of rulemakings.  The SC-CO2 is an estimate of the economic damages associated with a small increase in carbon dioxide (CO2) emissions, conventionally one metric ton, in a given year.  This dollar figure also represents the value of damages avoided for sa small emission reduction (i.e., the benefit of a CO2 reduction).

“The SC-CO2 is meant to be a comprehensive estimate of climate change damages and includes changes in net agricultural productivity, human health, property damages from increased flood risk, and changes in energy system costs, such as reduced costs for heating and increased costs for air conditioning. However, given current modeling and data limitations, it does not include all important damages. The IPCC Fifth Assessment report observed that SC-CO2 estimates omit various impacts that would likely increase damages. The models used to develop SC-CO2 estimates, known as integrated assessment models, do not currently include all of the important physical, ecological, and economic impacts of climate change recognized in the climate change literature because of a lack of precise information on the nature of damages and because the science incorporated into these models naturally lags behind the most recent research.”

“Economics tells us that in order to maximize social welfare, regulators must make sure that the market properly accounts for all externalities, like pollution, that might otherwise escape valuation in a transaction. Failing to fully value all attributes of energy resources, including externalities, puts a thumb on the scales in favor of an otherwise undesirable technology, which reduces net benefits to society. By failing to account fully for carbon pollution, for example, many regulators tip the scales in favor of dirtier energy sources, letting polluters pass the costs of their carbon emissions onto the public.

Ideally, an economy-wide carbon price would require dirty generators to pay for the full cost of each ton of carbon they emit. However, no economy-wide carbon price exists, and even states that have carbon pricing do not account for the full cost of carbon effects. The federal government’s Social Cost of Carbon estimate is currently $36 per ton of carbon emitted. But the most recent Regional Greenhouse Gas Initiative (RGGI) auction priced carbon allowances at $4.53 per ton.”

The Oregon Legislative Review Office estimates the SC-CO2 in 2020 to be $67/ton.  Social costs are key to the effort to engage in actions that ensure climate justice while meeting Oregon’s climate goals.

Methane as a Greenhouse Gas (GHG).   In 1980 methane contributed 28% of total fossil fuel emissions for the USA and 42% in 2013. The increasing trend in the relative importance of methane in the greenhouse gas emissions of the USA is due to an increasingly large portion of the nation’s fuel mix coming from natural gas and particularly from shale gas for the time since 2009.

As recently as 2010 methane was regarded as a fraction of anthropogenic GHG emission compared with CO2 (16% vs 65%).

A recently published study led by a climate scientist from Portland State University indicates that fugitive fossil fuel methane emissions have actually increased since the 1980s by an average of about 24 megatons, or million tons, per year, with much of this growth occurring since the year 2000. At the same time, the study suggests that methane emissions from wetlands, rice cultivation and biomass burning have fallen. This new study comes to these results using an entirely different method than what’s been applied before.  It relies on an analysis of different carbon isotopes — different chemical forms of the same element — found in methane captured in air samples throughout the decades. Methane produced by different sources tends to contain different isotopes, so by parsing them out scientists can tell how much methane came from which activities.

As methane emerges to become one of the dominant root causes of climate damage it is important to emphasize that the effects of methane decline rapidly as it devolves into CO2 in a matter of decades, although CO2 itself lasts for centuries.  Short-term benefits of methane containment would be dramatic.  The combined effect of the IPCC reporting increased GWP20 standards for methane over the last 20 years, together with recognition of methane as a more pervasive climate driver has resulted in the conclusion that non-renewable natural gas power generation is no better than coal.

Terms for attainment of Oregon climate goals, after accounting for infrastructure leakage and current IPCC near term GWP for methane, must be updated by the Oregon Global Warming Commission to draw meaningful conclusions.

Except where otherwise noted, content on this wiki is licensed under the following license: CC Attribution-Share Alike 4.0 International